PSK-31 in the Boundary Waters

I've been taking annual canoe trips with family and friends to the northern Minnesota Boundary Waters Canoe Area for seven  years. In 1996 I carried along an MFJ-9020, a small gell cell, a small solar panel, a Radio Shack straight key and a dipole. This was my first attempt at operating in the field. Unfortunately, the solar panel was smashed to bits during the trip out to Ensign lake which limited my operating time. The 9020 had a habit of drifting as the temperature changed but I was able to manage about three contacts.

In 2000, I tried portable QRP again. This time, I was armed with an Oak Hills OHR-100A, a ZM-2 tuner, a Whiterook mini-keyer and a dipole. Power was from two 6 volt lantern batteries. The lantern batteries turned out to be a huge mistake because under load the lantern batteries dropped to 10 volts in only a few minutes. The OHR-100A started chirping badly when voltage dropped under 10 volts. I patched in a D cell battery from my flashlight and was able to log about 20 great QSO's during that trip. I created a special QSL card for that trip. Logs here

Early this year I purchased an PSK-20 and have had a great time making contacts around the world with only a few watts. When 20 was open, the PSK-20 could talk just about anywhere. I also built a Warbler and managed to log QSO's out west with only a couple watts. All this success led me to attempt a more ambitious expedition for 2001.

For 2001, I will attempt to run a portable PSK-31 station from the BWCA. I'm hoping for an all-in-one PSK-31 rig for this trip but it looks like it will be a while before such a solution is viable. It's a scary thought, but it looks like I'll have to bring a computer on the trip to the Boundary Waters.

I took a Palm Pilot to the BWCA in 1998 that did not survive that unusually rainy trip. The electronics were destroyed by the rugged rainy weather conditions. I kept it in a Ziploc bag that did not have a very good seal. It was never in direct contact with water or rain but mist and humidity killed the Pilot. I had to send it in for repairs. Lesson learned: Keep your computer dry!

I have a Fujitsu pen computer that should survive this trip. I purchased it last year at the Berryville, VA hamfest to browse the internet wirelessly while on the back deck relaxing. It is a 486-100 with 40 MB Ram, a 360 MB hard drive and a pen interface. It weighs in around 3 lbs and it is fairly rugged. With dimensions of 7.3 x 11.0 x 1.6 ", the computer is much larger than a typical Palm Pilot. However, it can run Windows 98 and Linux providing flexibility and compatibility that is unmatched by a small pen computer. It does not have on board sound so I've added a matching Fujitsu PCMCIA sound card. I've tried pen input with the Fujitsu but it's just too tricky during a QSO. I've tried both the writing recognition software and the on-screen keyboard. Heavy use of macros helped but it was still very difficult to carry on a QSO. Luckily I found a flexible keyboard for the trip. I can lay the keyboard on top of the small solar panel to provide a typing surface if necessary. A mouse is not required because almost all functions are available from the keyboard. The pen will take care of any mouse operations.

The equipment is currently in the testing and debugging phase and I'm happy to report great results so far. I've been testing the PSK-20 with AA NiMH batteries with great success. The new 1800 mAh batteries last a solid 10 hours on PSK-31 with average QSO activity.  The voltage stays above 12 volts until the very end of the charge cycle. The Li-ion battery in the Fujitsu will last a bit over 4 hours with a full charge. I anticipate running in the rig in the evenings after a day of fishing so four hours should be more than enough QSO time for a day.

The solar panels are a key ingredient for a successful Canoe expedition. My solar panel disaster in '96 almost turned me away from even attempting this expedition until I discovered the UniSolar panels. Originally designed for boats, these panels are completely flexible and can be rolled up, walked on, dropped in the water and generally abused with no ill effects.  Initial testing of these panels proved very promising. The solar panels weigh 3 lbs combined. I'm measuring .38A from the USF5 under direct sunlight and .675A on the USF-11. The USF5 will be used to charge the AA NiMH batteries. The new generation of NiMH can be charged with fairly high current as long as you watch the temperature and don't overcharge them. The USF11 will charge the pen computer. If I need more current, I can run the panels in parallel.

I'll be testing this configuration until I leave for the trip on August 23rd, 2001. My biggest concerns are weight and reliability. We must carry all our equipment including canoes, food, fishing tackle across each portage from lake to lake so weight is always a concern. I'm estimating that this rig will weigh in at close to 10 lbs. Luckily,  we don't have to portage a lot this year so I should be okay. I'll just stuff the Pelican 1400 case in my large fishing tackle bag and trim down on the fishing tackle. No one will notice since everyone else has large tackle boxes. It will just be a tad heavier :)

Reliability is a major concern. There are a lot of things that can go wrong in the wilderness. I've got an assortment of cables to hook up and weather could play havoc on some of the gear. I'm working on trimming everything down to the absolute minimum including keeping cables as simple as possible.

Will this expedition be a success? I sure hope so!

I will be on 20 meters August 25th through August 31st and anticipate being on the air between about 00:00 to 04:00 UTC. I'll try to refine the schedule and frequencies bit by the end of this week. I may be on 80 meters some nights after 02:00. Any schedule suggestions are welcome.

I'm trying to confirm the county I will be in during my stay. I'll be on Disappointment Lake In the Minnesota Boundary Waters Canoe Area until at least the 24th. We may move a bit further east after the 28th.

08/07/01    Blew an SMT diode in the pen computer today. I accidentally wired the solar panels in series sending well over 30 volts to the computer's charger. Computer still works but no indication of charging and windows no longer recognizes battery power. Contacted Silicon Salvage in CA for replacement board. They had a Stylistic 1000 barebones for $25. It should be here in a few days.

08/08/01    Decided on a slightly different case to haul everything in... The Pelican 1400 is a bit too big for even my large tackle bag. Instead, will order Pelican 1420 which is designed to mount in a canoe and will hold more stuff.

08/09/01    I received the flexible keyboard today. It rolls right up just like they say. It feels pretty mushy so it will take some getting used to, but I used it for a few QSOs this evening and it worked ok. Worked W5PFR, ES7FQ and AA5HV. A laptop is substituting for the pen computer until I get the replacement board. The AA batteries work great with the PSK-20.

08/17/01    I received the bare bones Stylistic this week. The unit came with Fujitsu's monochrome trans-reflective screen. Trans-reflective means that it is very bright and viewable in daylight and has a backlight for night. The monochrome screen is not as pretty as the color screen, but it seems much more practical for the trip. It also seems to use less power so I'm going to take the monochrome screen on the trip. --- I've gotten quite used to pen input on the Fujitsu and I'll use pen for my QSOs. I'm still going to bring the flexible keyboard for emergencies. For example, if the computer goes into safe mode, the pen input no longer works. --- I haven't had much sun lately to test the solar panels but I have found that the large panel does charge the Fujitsu as long as I don't let the battery capacity drop below about 40%. Below 40% the charge regulator seems to drop out on the Fujitsu. The small panel charges the AA batteries just fine. --- Heard several QRP portable QSOs on 20 meters tonight.

08/19/01    I've decided I'm going to use a delta loop on 20 meters. I've got 80 feet of 450 ohm open wire and lots of tall trees so I can get the apex high in the trees and stake the corners into the ground. I should be able to easily move the stakes to change beam direction. To hang the antenna, I'll use a golf ball with an eye hook in it and just cast it up with my fishing rod (thanks AA5CH). I've been able to cast the golf ball at least 60 feet high.

08/20/01    Finally the sun arrives! I was able to get some great testing in yesterday and today looks like another great day for solar testing. Yesterday I discovered that I can't charge the pen computer directly from the panel if my charge drops below about 40%. The charger in the computer requires more current and voltage than that the panel supplies (725 MaH). The pen computer likes about 15~16 volts to charge which is a good match for the panels 16.5 volts. That is, until the Lion batteries charge drops below 40%. At that point the internal charger cuts out. The solution turned out to be charging the pen computer and 12 AA NimH batteries in parallel. As the batteries charge, the voltage rises and soon the pen computer starts charging. Luckily the AA cells can handle 800+ milliamp charge currents so it all works out nicely. And the system charges in a few hours depending on the charge level of the batteries. As an added bonus, having the batteries in parallel helps provide the constant voltage that the Lion battery likes when charging. Once the pen computer is charged and cuts out, I need to watch the voltage on the AA batteries to avoid damage.

08/21/01    Solar testing complete. Today was a very Boundary Waters like day with lots of cumulus clouds floating around. I charged 24 AA batteries and the pen computer from the 11 watt solar panel in a little over 4 hours. All the batteries had partial charges similar to what I'll have in the Boundary Waters. It looks like I won't need the second smaller panel.

09/03/01    The expedition was a success! However, it was quite a challenge getting on the air. Day 1: Found that a rivet had punched a hole nearly clean through the middle of the solar panel during the plane trip and on the first day in the field I was greeted by a crashed hard drive. Windows would not boot. Once I finally got on the air at the end of the trip, I managed to log 17 contacts and send 1 email. Full details to follow. 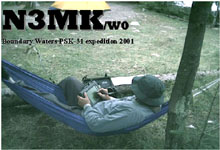 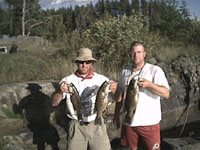 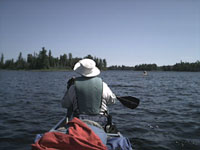